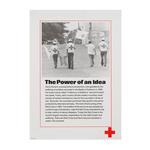 'The Power of an Idea' poster

Description
This poster, with a black and white photograph on it, was one of many posters that have circulated since the initial formation of the British Red Cross. It captures four people walking down a road; three have the emblem on their clothing and two are carrying flags with the Red Cross emblem on them.

The writing that goes alongside this photograph explains the evolution of the organisation from its founding up until the present date, the story of which emphasises how one man’s inspiration for a kinder world can be extremely powerful.

The influence that each and every one of us has is beyond our comprehension.
The British Red Cross evolved from Henry Dunant’s disillusionment with the lack of care during the Battle of Solferino in 1859. Dunant, appalled by the events of the battle, decided to write a book entitled 'A Memory of Solferino'. In this book, he put forward two important ideas. Firstly, he proposed that each country should create a voluntary relief society of trained members to care for the wounded in times of war. These societies should provide neutral and impartial help to the wounded. Secondly, the wounded and those helping them should be protected by international treaty. In response to these ideas, a committee, which later became the International Committee of the Red Cross, was established in Geneva. The organisation’s founding charter was drawn up in 1863 and the emblem of the Red Cross was adopted as a uniform sign of protection. Later, the organisation extended its role to help victims of natural disasters.

With 190 recognised National Red Cross and Red Crescent Societies, the Red Cross is the world's largest voluntary organisation for the relief of pain and suffering around the world today. We should never underestimate our power to have an influence in the world. One man’s idea did change the world and continues to have a phenomenal impact on the lives of thousands across the world today.