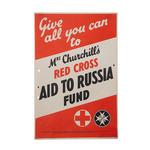 By Autumn 1941, Nazi Germany had advanced into Russian territory and Russia was in dire need of non-military supplies to sustain its population. The poster pictured and badges carrying the same message represent British efforts to support Russia, which was one of Britain’s key allies at this stage of the Second World War.

To this end, Clementine Churchill, who was the Prime Minister’s wife, vowed to raise money for Russian civilians. In 1941, she launched and became chairman of what was officially known as ‘Mrs Churchill’s Red Cross Aid to Russia Fund.’ It aimed to raise money that could provide clothes and vital medicine to people across Russia. Mrs Churchill was grateful for any and all donations to the cause and would regularly send thank-you letters to donors. Some of the contributions came from the Penny-a-Week Fund, a scheme whereby a penny was deducted from the weekly salaries of 1.4 million workers across Britain.

Clementine Churchill’s efforts were recognised by Russia, with her being awarded the Order of the Red Banner of Labour.