Description
This poster features a photograph of two Prisoners of War unpacking a food parcel and an appeal for help to the public to send donations to the Red Cross and St John. The War was declared in September 1939 and the British Red Cross joined forces with the Order of St John to help the sick and wounded. They formed the Joint War Organisation, which helped to coordinate wartime activities more efficiently under the protection of the Red Cross emblem.

The Prisoners of War Department was responsible for packing and dispatching parcels to British Prisoners of War. British Red Cross food parcels played a vital role in helping to keep prisoners alive. These greatly improved many prisoners’ quality of life.

The poster shows the joy of the POWs at receiving a food parcel. This would have been a terrific morale booster, which would have been desperately needed, especially by those in long term captivity. It shows what kindness can achieve in a war situation.

The British Red Cross did many good things during World War Two but, to me, the large scale distribution of food parcels was one of its greatest achievements and was a lifeline to thousands of people. 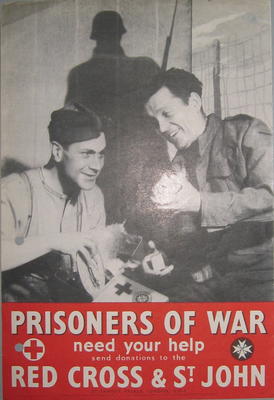