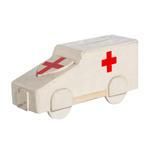 Description
This charming collecting box proved to be very popular with the public after the first home ambulance service started in 1919. The first collecting boxes were wooden and simple, but in the 1920s designs became more creative. This particular version is modelled on one of the British Red Cross’s ambulances that were used at the time. It has a large coin slot on the top, as well as the charity’s emblem on its sides, front and back.


I have chosen this object to honour the ordinary people whose generosity was indispensable to the work of the British Red Cross. Fundraising was vital to saving countless lives, both in times of peace and during conflicts. Throughout the Second World War alone, Red Cross ambulance crews carried over 1 million casualties and patients and covered close to 9 million miles. This would not have been possible without the generous donations of ordinary people at a time when money was scarce and rationing was the norm. 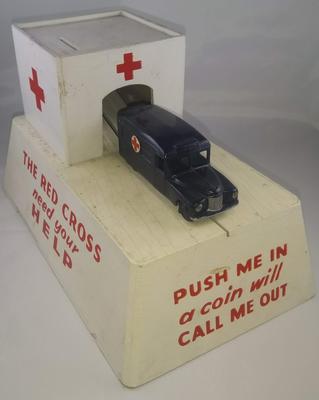 British Red Cross mechanical collecting box with roll out model ambulance: 'Push me in - a coin will call me out'; Fundraising/collecting box; 287/14/3(1)
Loading...