Description
'Nice One Henry' t-shirt with a grey portrait of Henry Dunant and the words "Nice one Henry!" on the front. The reverse reads, "Henry on World Tour with The Red Cross Since 1863."

History
When Swiss businessman Henry, or Henri, Dunant came across the aftermath of the Battle of Solferino in Italy in 1859, he organised local people to assist the wounded soldiers. Following this, Dunant and five of his peers set up the International Committee for Relief to the Wounded in 1863, creating national relief societies to assist the wounded in war. This later became the International Committee of the Red Cross (ICRC). 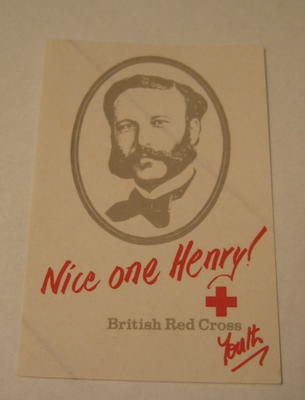