Description
Limited edition commemorative cup: Queen Elizabeth's Golden Jubilee, 1952-2002. Cup is white bone china with gold rim and displaying a modified version of the Queen's Badge of Honour. On base is written: 'Produced as a limited edition of 500 of which this is number 1.' Cup is in a cardboard presentation box and has a Certificate of Authenticity.

History
Certificate of Authenticity includes the following text written by Sir Nicholas Young: 'In her Coronation Year, Queen Elizabeth became patron of the British Red Cross, carrying on the proud tradition of Royal service to the world's largest independent humanitarian organisation. This fine bone china, produced as a numbered limited edition of 500 cups, honours that fifty-year commitment. Its design is a modifcation of the Queen's Badge of Honour, the highest decoration the British Red Cross can bestow and was chosen not only to honour Her Majesty's continuing commitment but the service to vulnerable people by generations of volunteers.' 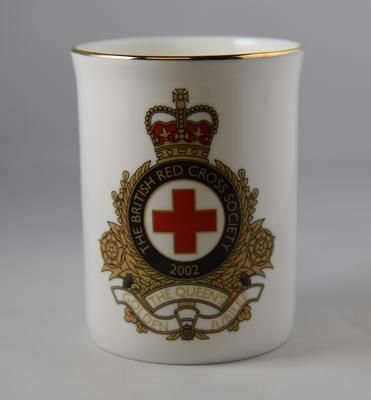