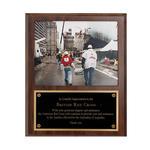 Description
This framed photograph and plaque is an item of appreciation gifted to the British Red Cross from the American Red Cross, with a production date between 2001 and 2002. The photograph is of two volunteers, one from each organisation helping each other carry a large pack of water to those in need on the day of the events of September 11th 2001. The photograph is framed in dark wood and beneath the photograph sits a plaque which reads: ‘In Grateful Appreciation to the British Red Cross. With your generous support and assistance, the American Red Cross will continue to provide care and assistance to the families affected by the September 11th tragedies. Thank you.’

In the photograph, the two volunteers are wearing contrasting colours, identifying that they have come from two different organisations. The one in white is a British Red Cross volunteer and the one in red is an American Red Cross volunteer. This is a remarkable photograph as you can see them heading towards the site of the destruction that was once the Twin Towers to provide victims and workers with water. It is symbolic of the general feel around the world on September the 11th 2001, where everyone came together to help the United States during their moment of crisis.

The reason I was interested in this photograph and plaque is largely because of the cliche, ‘a picture paints a thousand words’. I wanted to research one source solely based on how the British Red Cross responded in the immediate aftermath of a crisis and I feel that this photograph is a prime example of the humanitarian aid that they provide. The photograph and plaque show how in a moment of crisis the British Red Cross rush immediately to the scene to give support. This was true of the 9/11 attack and continues to be true well into the 21st Century.