Description
A collecting box in the shape of a red cross emblem for the Disaster Emergency Committee Tsunami Earthquake Appeal in 2004.

A sticker has been added to one side of the box with the words 'Reading Evening Post. British Red Cross. Supporting the DEC Tsunami Earthquake Appeal.’

On boxing day in 2004, one of the largest earthquakes ever recorded triggered a devastating tsunami that impacted 13 countries across the Indian Ocean. Within hours, more than 200,000 people were killed, 500,000 were injured, and millions of people across South Asia were made homeless.

The British Red Cross responded by launching one of the largest recovery efforts by the charity since the Second World War. Relief items such as blankets and hygiene supplies were sent. The Disasters Emergency Committee, of which the British Red Cross is a member, raised £372 million to help people affected by the Tsunami. 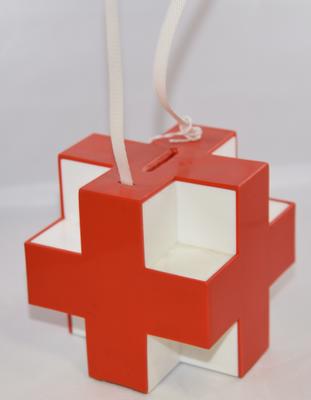