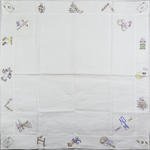 Tray cloth made in Changi gaol