Description
Political cartoon: 'Qana.' Cartoon (colour) relates to the air raid on the Southern Lebanese village of Qana, by Israel in 2006. The cartoon depicts a male Red Cross member in orange work wear and white helmet, all bearing the emblem emerging from the rubble of the post-bomb scene carrying a white dove with an olive leaf falling from its beak. The word: 'CEASEFIRE' is written across the dove's body. Two arms can be seen of people trapped under the rubble. The sketch is dated and signed and bears the title 'QANA...' in the top lrft corner.

History
The attack demolished a residential building that was being used to shelter Lebanese refugees. According to Lebanese Red Cross and hospital records, twenty-eight people were recorded killed in the attack on Qana. At least eight people in the homes survived the attack, some of whom were wounded. Israel halted air strikes for 48 hours following the attack, amid increasing calls for a cease-fire in the conflict between Israel and Lebanon's Hezbollah guerrillas. 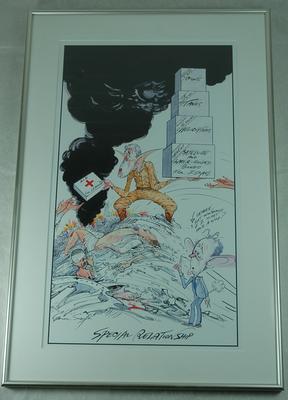