Description
Colour political cartoon in depicting the Anglo-American "special relationship", in which United States President George W. Bush, on top of a scene of devastation, disburses unequal quantities of munitions for Israel and aid for Lebanon. This takes the form of a box held by Bush labelled: 'Aid for Lebanon' with the Red Cross emblem with a pair of hands reaching out to acept it and in his other hand a tower of boxes labelled: 'Urgent, Satellite and Laser-Guided Bombs for Israel; Courtesy of US Tax Dollars. Helicopters; Via Prestwich, Tanks; Paperwork in order, Guns.' An injured/dead figure lies at his feet and a bandaged child is emerging from the bombed remains. The remains of bombed buildings can be seen in the distance and a huge cloud of black smoke rises from them. A small, plaintive British Prime Minister Tony Blair looks on and, raising his hand, asks, "Yo George. I just wondered if I might have a word?" "Yeah, Blair, what are you doing?" (misreported as "Yo, Blair. What are you doing?") was an informal greeting that George W. Bush gave to Tony Blair during the summit of the Group of Eight industrialized nations ("G8") in St Petersburg, Russia, on 17 July 2006. The quote gained wide popularity across the media. Signed by the artist, with the title under the illustration.

Associated Person and Role
The Times 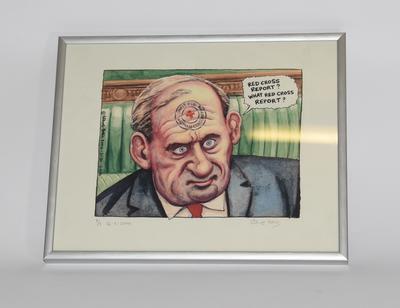 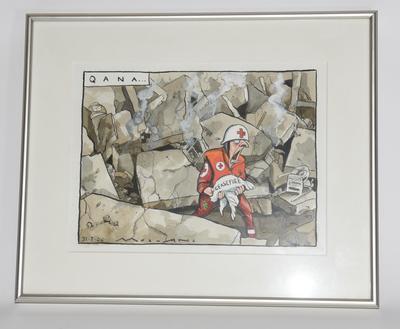