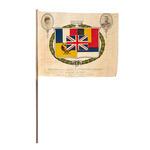 Description
This silk flag was a souvenir, made for the Clara Butt-Rumford Concert at the Royal Albert Hall on the 13th of May 1915, held in aid of the British Red Cross and the Order of St John.

Dame Clara Butt was born in 1872 in Southwick in West Sussex and moved to Bristol with her family at the age of seven. Her talent was recognised and she was awarded a scholarship at the Royal College of Music in London in1890. She quickly became a world-famous singer and performed in packed concert halls all over the world. Clara possessed an amazing contralto voice and she was known as the "Voice of the Empire."

Clara arranged a number of concerts in aid of the Joint War Committee, consisting of the British Red Cross and the Order of St John, during the First World War. The Royal Albert Hall concert commemorated by this silk flag was attended by the King and Queen and it raised over £7,500, which would be equivalent to approximately £765,000 today.

During the four years of the First World War, Clara was a tireless worker for war charities and helped to raise over £100,000, an enormous sum of money in those days. In 1920, she was appointed ‘Dame of the Empire’ by King George V for the money she raised. Her final concert was in Sydney in 1934, and she died of spinal cancer two years later.

Clara is a wonderful example of how our lives as artists can contribute to philanthropic endeavours. I believe that everybody can make a difference, and mentorship is a huge part of what I do. So it is a great pleasure to be able to support the British Red Cross to make a difference in the world we live in.

History
Dame Clara Butt, the world-famous singer, arranged a number of concerts in London and the county in aid of the British Red Cross and Order of St John during the war years. At a concert held at the Albert Hall in May 1915, before the King and Queen, it is reported that Dame Clara gave a programme of popular and patriotic songs, including for the first time Sir Hubert Parry's 'Hymn for Aviators'. This concert produced over £7,500. 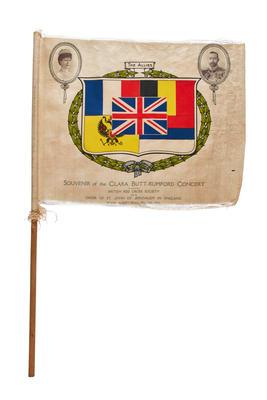