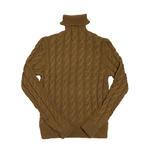 Description
This Polo-Necked Sweater is just one example of the many garments sent to prisoners of war during World War II. The Polo-Neck, also known as a turtleneck in the US and Canada or a Skivvy in Australia and New Zealand is designed to keep the wearer warm and comfortable in harsh, cold climates. This particular sweater uses a cable knit pattern, specifically a two-cable braid knit where layers of fabric cross over each other to create a serpentine pattern. The majority of sweaters during this period were generally made from wool, cotton or angora (which is rabbit hair, which was often used due to wool rationing).

The number of British Prisoners of War, or POWs, captured by German and Italian forces on the Western Front is estimated to have exceeded 170,000. These captured British soldiers would find themselves interned in a vast network of POW camps run by the German and Italian military and had to endure harsh conditions. In order to help POWs alleviate some of their suffering, parcels were sent overseas to the captured soldiers.

As well as food, a major contribution to the cause by the British Red Cross was delivery of clothing. Many people in Britain began to hand knit clothing for POWs, wool was sent to schools and the Women’s Institute to help the war effort. Over 22 million knitted garments ranging from mittens to balaclavas were made by the Women’s Institute and organised and delivered by the British Red Cross.