Maltese type cross made from a piece of Zeppelin

Description
This is a Maltese style cross, made from aluminium recovered from a destroyed airship, which was shot down over Essex in 1916. It’s engraved in an amateur fashion, and reads ‘Zeppelin, 23rd/24th Sept 1916’. A note along with the objects tells us this was the second Zeppelin brought down at Billericay, near Essex. The Zeppelin in question was the German L32.

When it was shot down, the wreckage of the airship attracted a huge crowd, and even though the police tried to prevent souvenir hunting, it didn’t stop people finding little bits and pieces to keep. I quite like this magpie-like tendency people have to want to collect things that they think might be important in the future, and to be able to say ‘I was there, I remember that’. On the surface, a bit of scrap metal from a Zeppelin doesn’t seem like it would be worth very much to anyone, but it was obviously symbolically important enough for someone not only to want to save it, but to turn into a piece of memorabilia as well. Pieces of the L32 can be found as far away as Australia, because they were collected and kept by both soldiers and civilians.

I wondered if perhaps this was a piece of memorabilia that was sold to raise money for the Red Cross, as had happened when the L32’s sister ship, the L33, was shot down the same night. It’s hard to imagine what the villagers felt when they were greeted with the wreckage of such a vast vessel. For something bigger than a cathedral to come crashing into a local field must have been both terrifying and spectacular. Bringing down two airships in one night must have been a big boost for people’s morale, and there were even post cards and special editions of newspapers issued to celebrate the end of what you might call the Zeppelin’s ‘reign of terror’.

History
This was made from the wreckage of one of two Zeppelins that were shot down over south east England during the First World War. 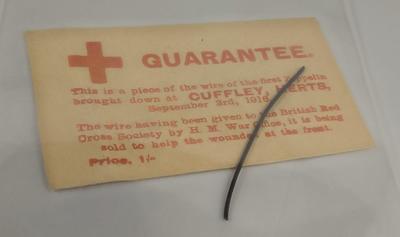