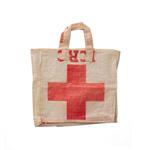 Description
These two carrier bags are truly ‘bags for life’. During the famine in Ethiopia from 1983 to 1985, British Red Cross staff used these carrier bags to contain relief supplies. The bags are made from flour sacks, cut and stitched together. A large red cross is printed on the side of each bag. These carrier bags were produced at the Maichew feeding centre, in northern Ethiopia, by an unnamed displaced person around 1984 to 1985. The resourceful creator of these carrier bags had likely trekked for miles, arriving at the feeding centre with a Singer pedal sewing machine as a lifeline to his future.

The British Red Cross field nurse and delegate Claire Bertschinger donated these items to the British Red Cross’ Museum and Archives. In her 2005 book ‘Moving Mountains’ she recounts how she was tasked with the responsibility of selecting children for intensive feeding at the Maichew feeding centre. She would ink a cross on the arms or forehead of those she chose. As she says, “I remember the feelings that accompanied having to choose who should live and who should be turned away. I remembered those who had suffered so dreadfully and those who had died – all for the lack of a handful of beans, some butter oil and some flour. My own life had never been on the line.” In 2003, Claire re-visited the Maichew feeding centre for a BBC documentary. She saw a marketplace that was full of fruit and vegetables and even encountered one of the children she had fed almost two decades earlier. To these children, she had become known as ‘Mamma Claire’.

These carrier bags are material testimony to the creativity of displaced people who had been enterprising with the limited resources available to them. The carrier bags made from flour sacks bring to mind artworks made by migrants in Calais. These creations also bear witness to the ongoing human experiences of displaced people – not just in Ethiopia, but also closer to home.