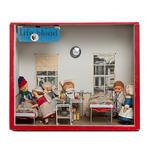 Description
Diorama: ‘Life Blood’ portrays a scene from the British Red Cross blood transfusion service which was created sometime between 1950 and 1960. The Diorama features four female members of staff, one male doctor and three donors. Two of the donors are lying in bed and one is receiving tea after having just donated blood. The diorama also features a trolley which contains the equipment needed for blood transfusion and bottles of blood.

The beginning of the twentieth century saw a rapid increase in the knowledge and understanding of blood transfusions thanks to the work of Doctors Karl Landsteiner, Richard Lewison and Richard Weil. Their discoveries of the four identifications of blood groups, the use of sodium citrate as an anticoagulant, and the realisation that anticoagulant blood can be refrigerated and stored for several days paved the way for the British Red Cross to establish a voluntary Blood Transfusion Service, following the First World War.

Percy Lane Oliver, a co-founder and Honorary Secretary of the Camberwell Division of the British Red Cross was the man responsible for this service as he organised a voluntary blood donor panel in 1921 following a request by King’s College Hospital for urgent volunteer blood donors. In the following five years, this service soared as panels were set up all over the country and was given official recognition by the British Red Cross in 1926. With the threat of the Second World War looming over, a growing number of blood depots were established in London and Bristol which aimed to supply wounded soldiers on the frontline with blood from central blood bank stores opposed to relying on those bleeding at the battlefront. This proved to be a huge success and in September 1946, the Ministry of Health created the National Blood Transfusion Service which would become part of the National Health Service in 1948. By this time, blood transfusions were no longer reserved purely for emergencies, but rather incorporated into routine surgery in hospitals.

I was particularly drawn to this diorama as without the hard work of Percy Lane Oliver and the British Red Cross, the blood transfusion service may not be where it is today. Considering a hundred years ago this service was a difficult arm-to-arm experience, the advancements we have made to the present day are incredible and still so important - it remains crucial for the NHS to have a consistent supply of blood.

Exploring the history of the phenomenal service we have in place today has been fascinating, the service has come on in leaps and bounds in less than a century, something which Percy Lane Oliver could have never predicted in 1921.

History
The British Red Cross was involved in blood donations from 1921 until 1986 when all aspects of the service were taken over by the National Blood Service.