Description
Lady Ridley's poem and material from 'Peace Day' on 19 July 1919 including photographs and a leaflet from the service of thanksgiving on 9 February 1919 for Chelsea and Westminster Divisions from a scrapbook created by Majorie Howell during her British Red Cross service during the First World War. Her service totalled approximately three years full-time and 350 hours part-time. She was attached to London/52 and was still serving in 1919.

History
Marjorie Howell enrolled with the British Red Cross in January 1912 as a quartermaster in East Lancashire VAD 54. She undertook three months of training at the London Hospital between September and November 1914. She then served at Fair Hope British Red Cross Hospital in Pendleton, Manchester from January to March 1915 and again from September to November 1915. While she was at Fair Hope she worked full-time on the wards. She then served at Ridley House Hospital, 10 Carlton House Terrace, London from May 1915 to May 1918 as a VAD nurse doing ward and hall work. Her service totalled approximately three years full-time and 350 hours part-time. She was attached to London/52 and was still serving in 1919. (Source: First World War general index of personnel) 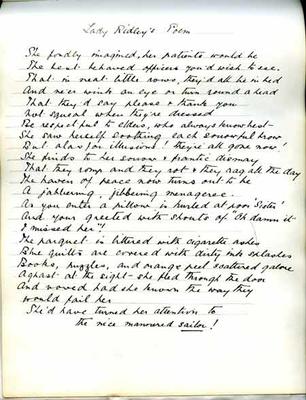 Scrapbook created by Marjorie Howell while she was a nurse for the British Red Cross; 1152/1
Loading...