Description
This is a watercolour painting by Robert Landells, showing Robert Loyd-Lindsay delivering financial aid to both sides during the Franco-Prussian War in 1870. He is followed by his assistant, Mr Whittle, who is carrying the money in his bag.

In July 1870, a week after the outbreak of the Franco-Prussian War, Robert Loyd-Lindsay wrote a letter, published in The Times, calling for the formation of a national society in Britain. As a result of his initiative, the society known today as the British Red Cross was founded at a public meeting in London on the 4th of August in 1870. It was initially known as the National Society for Aid to the Sick & Wounded in War and Loyd-Lindsay was the first chairman.

Just one month after the outbreak of the war, the National Society sent 40 medical men overseas to help the sick and wounded within the French and German armies. By the end of September 1870, a sum of nearly £200,000 had been raised for the Franco-Prussian War by the National Society; this is the equivalent of £24 million today. It was decided to give equal amounts of £20,000 (equivalent of £2.4 million today) to both sides, the French in Paris and the Germans at Versailles. The remainder of the funds was used for food, medical aid and surgical equipment.

Loyd-Lindsay played a personal role in the distribution of the funds; he travelled between the French and German lines to make equal cash donations to both sides to help ease the conditions for the sick and wounded.

In the painting, Loyd-Lindsay is shown following a uniformed man on a horse carrying a Red Cross flag. This was one of the first tests for the British national society of how ‘the white flag with a red cross was honoured by soldiers and patients alike’. The original flag is still in the possession of the British Red Cross today.

Robert Loyd-Lindsay was an important figure in the foundation of the British Red Cross. Not only writing the letter to The Times, but also pledging £1,000 of his own money to the cause.

After the Franco-Prussian War Loyd-Lindsay continued his involvement with humanitarian causes, and was raised to the peerage as Lord Wantage in 1885. He continued to serve the British Red Cross as Chairman until his death in 1901.

His humanitarian vision and commitment remains at the heart of the work of the British Red Cross today. 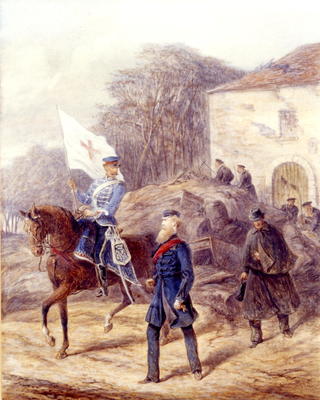 Colonel Robert Loyd-Lindsay and Mr Whittle at Versailles; IN0663
Loading...