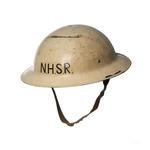 Description
This helmet was worn by a member of the National Hospital Service Reserve. The NHSR was a core role within Civil Defence during the Cold War, with members recruited from 1949 to 1968. The government allocated the British Red Cross Society the responsibility for organising this part of civil defence, along with St John Ambulance, and in Scotland, St Andrew’s Ambulance. The helmets in the collection are from around the 1950s, and are painted cream and made of tin.

The Civil Defence Act was passed in 1948, and in the following year the British Red Cross was part of a working party with the War Office and Order of St John, preparing the details of responsibilities for another potential large-scale war.

The NHSR was one of four elements of Civil Defence, with the others being the Civil Defence Corps, the Auxiliary Fire Service, and the Special Constabulary. The Civil Defence Corps included rescue, ambulance and welfare sections. Basic training for the Corps was to include first aid, along with preparations for wars involving ‘[h]igh explosive missiles …, elementary fire fighting, chemical warfare, [and] atomic and biological warfare.’ Therefore, the British Red Cross played an additional role in providing training for the Corps too.

NHSR members attended training sessions and exercises with scenarios and casualty simulations, practising their first aid skills for a potential war which might involve nuclear or chemical weapons. Although the service prepared for war, skills were obtained by volunteering within hospitals, within the new National Health Service. Indeed, when the NHSR came to an end in 1968, the Red Cross was keen to encourage members to continue this work within the health sector. In that year, the Red Cross also continued to train members for ‘national disasters and major incidents’.

I am researching the history of first aid thanks to support by the Arts and Humanities Research Council as well as writing about the history of the British Red Cross, 1870-2020. I have been performing re-enactments of first aid scenarios and techniques from the First World War to the Cold War in order to understand the methods and uniforms which were used in more detail, as well as to communicate research to the public in an engaging way. We re-created and wore helmets copied from the originals in the British Red Cross archives for re-enactments at the Museum of the Order of St John in London, and the British Science Festival in Hull in 2018.

This helmet is important to me as it represents the teamwork of organisations coming together to prepare for potential crises.

Inscription
Painted: N.H.S.R: name of department to which person was attached: National Hospital Service Reserve
on front and back of helmet
painted in black