Description
Stuffed Pooh Bear with red ribbon which belonged to Jennefer Martin whilst she was in Changi prisonl.

History
Changi was a prisoner of war camp during the Second World War. Civillians living in Singapore in 1942, including Doctors, teachers, nurses, nuns, missionaries, police and their families from Allied Britain, Denmark, Australia and Canada were sent to camps at Changi prison on the east end of the island.

This teddy bear is one of a number of items in our collection that was donated by the Davidson Family who were held in Changi Prison during the Second World War. 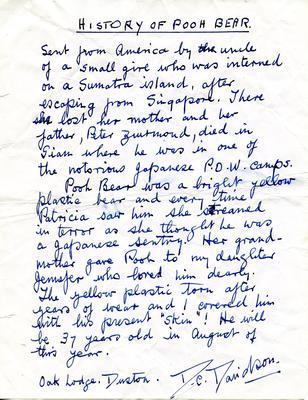