Description
This short note was written by Daphne Davidson to accompany a Winnie the Pooh teddy bear that was given to her daughter, Jennefer, by the British Red Cross in 1943. The note references the bear as being 37 years old this year, suggesting that she wrote it in 1980. Daphne Davidson and her daughter were prisoners at the Japanese Changi prison in Singapore during the Second World War, from 194 to 1945.

This note shows the positive impact the Red Cross had on people’s lives during the war. It provides a picture of both the horrors of war, as well as the kindness that was demonstrated throughout. Jennefer received this toy because another little girl could not bear to look at him due to the tragedies of her life. However, for Jennefer the bear was beloved, and she continued to remember him fondly, having referenced her receiving him in a speech in 2015. The note is also an important and personal document as it was written by Jennefer's mother in her own hand, years after the actual receiving of the bear, to explain the impact he had on her young daughters’ life.

I have chosen this object as I think it highlights the important role played by the British Red Cross, as a humanitarian organisation, during the Second World War. I was particularly drawn to it because as a child I also had a favourite teddy – mine was a green bear – that I loved so much that he was constantly being torn and had to be mended by my mum or gran. I think that it is amazing that the British Red Cross were able to bring happiness to this little girl, despite the conditions in which she had to live. So, this note is important because it illustrates the impact the work of the Red Cross had on people’s lives. 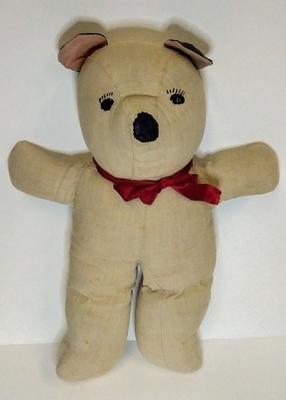