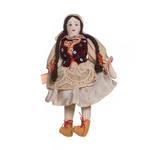 Description
This doll was made by a survivor from the Bergen-Belsen concentration camp and given to Enid Fordham, a British Red Cross civilian relief worker. Six days after the liberation of the camp in northen Germany on the 15th of April in 1945, teams from the British Red Cross arrived at the camp to provide support to those who had been interned. Welfare officers cared for children, cooks established canteens, and first aid posts were set up. Doctors and nurses were sent, and a group of medical students were also sent under the direction of the British Red Cross.

In the years after Adolf Hitler came to power in Germany in 1933, Jewish people experienced increasing persecution. Millions of Jews, as well as minorities such as gay people, Roma people and those with mental or physical illnesses, were forced into concentration camps. Following the Nazi-Soviet invasion of Poland in September 1939, Polish civilians were also persecuted. By the end of the German occupation of Poland, millions of Jewish and non-Jewish Polish people had been murdered by the Nazis.

The Second World War resulted in the displacement of millions of people, and large numbers of people in countries occupied by the Nazis came to the United Kingdom to seek refuge here. During and after the Second World War, the British Red Cross played an important role in the reunion of families separated as a result of the conflict.

My grandfather was such a refugee, who fled Poland when the Nazis invaded and eventually arrived in the UK, where he settled in Blackpool and where he served as part of the Polish Air Force which had a base there during the war. When I look at this doll I feel so grateful that he was lucky enough to escape Poland alive, and I am also hugely proud of how the British Red Cross has been helping people at their time of greatest need for the past 150 years.