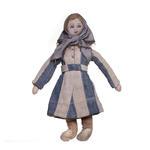 Cloth doll dressed as an inmate from Bergen-Belsen

Description
Cloth doll, dressed as a concentration camp prisoner from the Second World War. She is wearing a dress of blue and white stripes and a headscarf, and is approximately 20 centimetres tall. She dates from 1945 or 1946, and was made in the Bergen-Belsen camp in Northern Germany.

As the Second World War drew to a close, the British Red Cross was invited to help the survivors of the concentration camp following its liberation, and remained there until all inmates could leave.

Despite their work in Bergen-Belsen, more than 10,000 prisoners died of starvation and typhus following liberation; but many others were saved.

Dolls resembling concentration camp prisoners were made by the inmates themselves after the liberation, and were gifted by them to the British Red Cross staff in gratitude for their work.

This particular doll was given to Enid Fordham. Enid signed up as a volunteer for the British Red Cross in April 1945 and was immediately sent to Bergen-Belsen where she was posted as a relief worker for 16 months.

I was drawn to this object, because being a doll, it resembles something so innocent and pure, but at the same time it also symbolises a horrific moment in history. The clothing makes it immediately obvious as to what it represents.