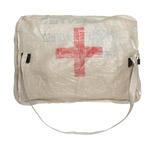 Shoulder bag made from food sacks in Angola

Description
This bag was made in a local workshop for orphans and people with disabilities in Angola. It was made from food sacks used in the International Committee of the Red Cross’, or ICRC’s, seed distribution centre. It was given to a British Red Cross delegate for the ICRC, who was working as a field nurse in Angola. This bag was one of many made to distribute to the community health workers, who were trained by the Red Cross, to enable them to carry medicines to remote villages. The civil war in Angola began in 1975 and ended in 2002. The British Red Cross provided vital relief to civilians in Angola.

As a Museum Curator, I am very drawn to objects which are made by people in conflict or crisis. These objects show the incredible strength and resilience of their makers. Different people from a wide variety of backgrounds involved in conflicts and crises around the world find ways to respond and survive through creativity. Objects crafted in conflict and crisis, whether decorative or functional, show that creativity is embedded in human nature. The Red Cross continues to provide food parcels and other supplies to people in need, just as it did in earlier conflicts, and individuals rely on them not only for their contents but also for their packaging, recycled to create objects for functional purposes