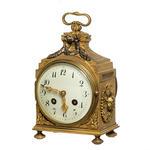 Description
This is an early 19th century French cased mantel clock made from iron and glass. It was presented by Princess Mary to Barnett Hill when it opened as the British Red Cross National Training Centre in 1946. The clock was formerly on display in Barnett Hill, which was loaned to be used as a convalescent hospital by the Joint War Organisation of the British Red Cross and the Order of St John.

Princess Mary had a long involvement with the British Red Cross - she undertook an active role in helping those in need. During the First World War, aged only 17, she spent much time visiting hospitals and welfare organisations with her mother. At the beginning of the war she set up the Princess Mary's Gift Fund which provided Christmas gift boxes for all servicemen. She was particularly interested in nursing and completed a nursing course. She joined the British Red Cross Voluntary Aid Detachment (or VAD) department in 1918 and worked as a VAD in Great Ormond Street Hospital. She went on to become a Commandant of her own VAD Detachment and in 1926 became Commander-in-Chief of the British Red Cross.

This clock shows not only her longstanding involvement with the British Red Cross but also her strong support. The gifting of this beautiful object shows how much she valued and appreciated the great work of the organisation.

As Curator of the British Red Cross Museum collection, I am fascinated by the objects we have in the collection in relation to the Royal Family’s involvement with the British Red Cross, who have had a long history of supporting the work of the organisation from its foundations in 1870. Queen Victoria was the first Patron; today the Patron is the Queen and Prince Charles is the President.

History
The clock was presented by Princess Mary, The Princess Royal in 1946. Formerly on display at Barnett Hill.