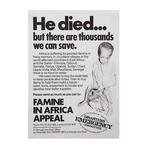 A widespread famine affected Ethiopia from 1983 to 1985. The worst famine to hit the country in a century- It left 1.2 million dead, 400,000 refugees left the country and 2.5 million people were internally displaced. Almost 200,000 children were orphaned.

*This is a historical item and is not representative of the type of imagery or language that the Red Cross would use today.