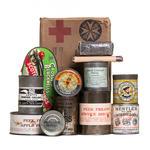 Description
Red Cross food parcel made in the United Kingdom during the Second World War.

Over the course of the Second World War, the British Red Cross sent around twenty million food parcels from the UK to British Prisoners of War scattered around camps in Nazi-occupied Europe and in the Far East. Food was often scarce in the camps, and these parcels were intended to provide the men with vital nourishment to supplement their dietary intake and prevent starvation.
The Red Cross had sought to send one food parcel to each POW per week, but logistical difficulties throughout the war meant that this was rarely achieved. Up to 163,000 parcels were packed each week, but supply halted at the outbreak and towards the climax of the war. Despite this, it became quite common for a POW camp to establish an organised system to share out the contents of a food parcel so everyone got his share when supplies were scarce. The parcels provided essential morale boosts to those who were being held captive as they reminded the men that they had not been forgotten. Red Cross posters in the UK described the parcels as ‘a bit of home’ for the men in captivity to try and raise funds to continue their supply.

The packages usually contained an assortment of familiar favourites, including tinned foods, dried milk, tea, cheese and marmite. Universally popular items such as chocolate were also included, and they became akin to camp currency as men bartered with them for other items in camp. The packaging was as useful as the contents, and campmates would use the string which tied the parcels together to make shoes, bags, brushes and hammocks, while the tins containing their food were used to brew teas and coffees.

The Red Cross also sent over 100,000 food parcels to the Channel Islands, which were occupied by German troops from late June 1940 to 9 May 1945. According to Frank Kingsley Gould, ‘they were eagerly looked forward to, and some ate them right away and had nothing for the rest of the time, but the sensible ones measured out over the month and survived that way’.

I was drawn to the Red Cross food parcel because of the significance of such a small package to the lives of the men held in captivity. For many, it was the difference between living and starving, and often, the sight of a Red Cross food parcel was the highlight of the week for a POW who had little else to look forward to.