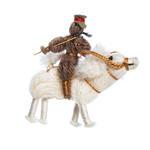 Description
A small doll made from wool, in the shape of an Australian soldier riding a camel. The doll was made out of respect for the Australian soldiers fighting the Turkish army in the Middle East at the time. It is part of a larger collection of woollen dolls found only recently by the Red Cross.

Each doll represents a soldier in uniform, from different nations of the allied forces. The dolls, also known as woollies, were made between 1914 and 1918 in the First World War by the Vancouver prisoner of war branch, the Canadian Red Cross. It was made as a fundraising toy for allied soldiers that were prisoners of war and was being sold for one Canadian dollar.

I see this doll as a great representation of creativity and a way of not only keeping up morale, but also maintaining a sense of normality for children living in such dire times as the First World War.

History
This type of doll, called a wooly, was made by the Vancouver Prisoners of War Branch, Canadian Red Cross as a fundraiser during the First World War. On the price list (ref: 2010/1) this doll was sold at $1.00.