Description
Oval plaque with the engraved words: 'LAHAYE SION BRASSEUR POPERINGHE FL OCC', belonging to Frank George Holmwood who served as an ambulance driver from November 1914 to June 1918, first in Italy with the First British Red Cross Ambulance Unit and later in France with no.4 Motor Ambulance Convoy, based in Boulogne. Poperinghe (today Poperinge and FL OCC stands for 'Flandre Occidentale' which translates as West Flanders), a Belgian town, seven miles West of Ypres, was one of only two towns in Belgium not under German occupation. The town was used to billet troops and provided a safe area for field hospitals. 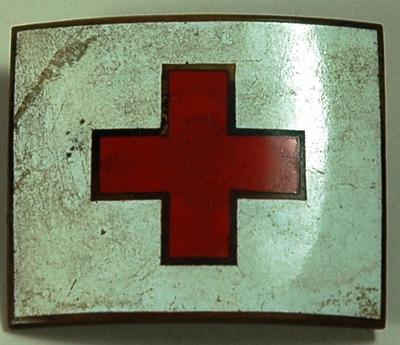