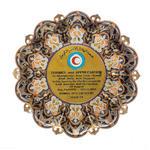 Description
This object is a decorative ornate metal plate gifted to Sylvia Pery, chair of the British Red Cross from 1985 to 1995. The plate has a patterned edging with a gold plaque in the centre. On the plaque there is the logo of the Kuwait Red Crescent Society as well as an inscription acknowledging the help and support received from the British Red Cross during the Iraqi invasion and occupation of Kuwait.

The 1990-1991 Gulf War, the conflict between Iraq and an international coalition supporting Kuwait, resulted in nearly three million refugees. The British Red Cross was pivotal in providing support and vital necessities to these refugees. The Red Cross Gulf Appeal was launched in January 1991 to raise funds to enable the British Red Cross and the International Committee of the Red Cross to support communities affected by the conflict. Many of these funds were utilised in aiding the Kuwait Red Crescent to support local communities. This plaque exemplifies the gratitude shown by local charities for the British Red Cross’s extensive international support during times of conflict.

Inscription
inscribed: 'Thanks and Appreciation To Aknowledge Your Firm Stand, Kind Help And Support To Our Society On the occassion Of Iraqi Invasion And Occupation of Kuwait Aug. 2nd 1990_26 Feb. 1991 Kuwait Red Crescent Society':
front

Associated Person and Role
Presented to: Sylvia Pery (b.1935)