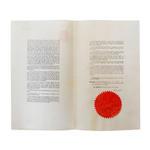 Description
This document is very historically important to the history of the British Red Cross. The Society was originally founded in 1870 as the British National Society for Aid to the Sick and Wounded in War. The organisation was renamed the British Red Cross in 1905 and they received their Royal Charter in 1908 from King Edward the Seventh. This very important document, written on parchment, was issued to supplement their original Royal Charter and add to their remit by King George the Fifth on the 3rd of September 1919.

A Royal Charter outlines the purposes, powers, rules, and legal requirements of an organisation. The first Supplemental Charter is a massively important document in that it gave the British Red Cross their role in peacetime. Prior to this grant, the Society held a solely conflict-focused role dedicated to “the primary object of furnishing aid to the sick and wounded in time of war.” This document, therefore, gave the society its peacetime role in domestic and international humanitarian work. The aim was “the improvement of health, the prevention of disease, and the mitigation of suffering throughout the world.”

I was drawn to this object as I understand its importance as a historical document. As 2019 is the centenary of this charter, it is significant to highlight that it was this grant that allowed for the change in the role of the Society and it provides an opportunity to remember the history of the Red Cross. It illustrates a significant turning point in the Society’s history and was the thing that has allowed the British Red Cross to become the organisation that it is today.

History
The 1919 Charter sought to extend British Red Cross activities to include a peacetime role.