'Is capture ever humane? Stateless Kurds'

Description
This object is a painting entitled ‘Is capture ever humane? Stateless Kurds’. It was painted by Eve Goldsmith-Coexter and donated by the artist to the British Red Cross.

In the painting we can see a crowd of people sitting together in a valley, with mountains in the backdrop. There is a red toned sky behind the mountains and a mother and child in the foreground of the image. One of Goldsmith’s aims through her artwork is to increase interest in organisations such as the British Red Cross.
This painting demonstrates the role of the British Red Cross in supporting displaced Kurdish refugees. During the conflict, thousands of Iraqi Kurds were forced to flee their homes.

It is estimated that approximately 1.85 million people fled to the borders of Iran and Turkey. The work of the British Red Cross was vital in supplying displaced peoples with essential supplies. £1 million which was donated by the British Red Cross and provided shelters to 700,000 Kurdish refugees. 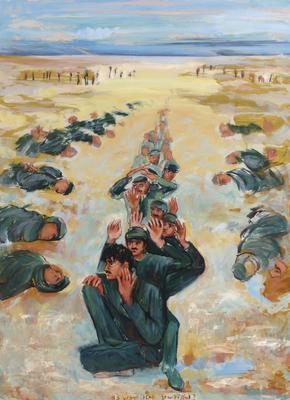