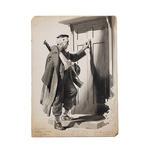 Black and white proof for a Penny-a-Week fund leaflet

Description
This black and white proof for a leaflet, which was issued during the Second World War, 1939-1945, shows a wounded soldier in his uniform chapping, or knocking, on a door. He is dressed in military style clothing – wearing a heavy, possibly woollen, coat, and muddy boots – and carries his helmet and a rifle. He has clearly been wounded, as he wears a blooded bandage around his head and his right arm is in a sling.

The Penny-a-week campaign was launched by the British Red Cross in November of 1939 as a way for the society to raise money to fund their humanitarian work during the war. This fund was crucial, for example it allowed for the preparation and sending of food parcels to those in prisoner of war camps and to soldiers serving abroad. Its aim was to get voluntary contributions of one penny per week from wage earners, to be deducted from their pay which, at this time, was around 10 pounds per week. These earnings were then supplemented by collection cards and house calls carried out by volunteers – like the one depicted here. As this leaflet shows a wounded soldier it was intended to illustrate how the money could help those on the front lines.

The wounded soldier has obviously come home from war and has decided to continue to help his country by collecting to help those who are still on the front lines or imprisoned. This makes it an important object as it illustrates the significant role held by the British Red Cross in wartime, as well as the importance of fundraising.

This is an interesting leaflet which was intended to encourage people to contribute to this fund, to help the British Red Cross to assist those involved in the war. I was drawn to this object as it conveys the importance of supporting this campaign in a very clear and simple way. It is well drawn, and the leaflet conveys that those who had fought in the war and had been injured still wanted to contribute in any way they could. 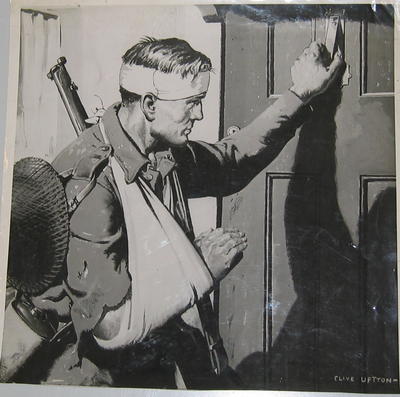