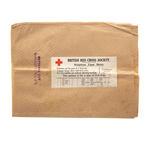 Description
A brown paper pattern for a ‘Helpless Case Shirt’ from World War One with a white square instruction label on the front which reads: ‘The British Red Cross Society, White flannel or Viyella, Helpless Case Shirt, All Turnings allowed, Full Size, Only one size necessary, as this garment is adjustable, Material Required: 4 yards material, 33 inches wide. Pattern should be recut in heavier paper if several garments are to be cut from one pattern’. The British Red Cross created standard patterns with instruction booklets which volunteers used to make the garments.

During World War One there was a shortage of hospital garments. Local British Red Cross working parties were formed all over the country and they made and dispatched garments to hospitals both at home and abroad. This ‘Helpless Case’ pattern was used by Voluntary Aid Detachment Hilda Lloyd in the Central Work Rooms in Burlington House. This venue was, and still is, the Royal Academy of Arts. The galleries were transformed into spaces for pattern cutting, garment sewing and bandage making. At one stage there was even a room dedicated to spinning dog hair to use for knitting! In total the Central Work Rooms made 75,536 garments and 705,499 bandages from patterns like this.

I found this pattern interesting due to its name, ‘Helpless case’. I wondered what injury it was for, as this is not terminology we would use today to describe someone with an injury. The ‘helpless case shirt’ was designed especially for people with arm injuries. The pattern was created so that the shirt was reversible, meaning it could be worn by patients with injuries on either the right or left arm. One arm was finished, like a normal bed shirt, however the other was left open and had tapes to fasten it closed, around the injured arm.