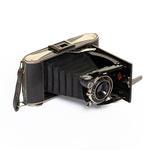 Description
During the Second World War, over 170,000 British prisoners of war (or POWs) were held captive by German and Italian forces. The Geneva Convention of 1929 detailed the acceptable treatment of POWs; however, the conditions in the POW camps were still difficult. They had to survive on small food rations and some had to carry out manual work. To overcome boredom, POWs staged theatre plays, sporting activities and took up studying.

The British Red Cross provided many services for POWs during the war. The organisation was in a unique position to do this because the 1929 Geneva Convention officially recognised relief societies to distribute relief in prisoner of war camps. This included food parcels, next-of-kin parcels, recreation and sport supplies, educational services, medical supplies, and clothing.

This camera, a model Agfa 7.7 produced in the 1930s, was used by a prisoner of war in Stalag 383 POW camp in Bavaria to capture everyday life in the camp. The photographs, which are also held in the British Red Cross archives, include images of the photographer and his friends, theatrical productions and sports activities which took place in the camp.

This object immediately appealed to me because it seems so incongruous in the setting of a prisoner of war camp. I’m fascinated to know whether it was contraband and smuggled in, or whether it was provided by the British Red Cross.