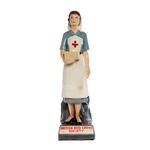 It is in the shape of a British Red Cross Voluntary Aid Detachment (VAD) nurse from the Second World War. During the War, VADs worked in various roles - as drivers, clerks, cooks, and laboratory technicians. The majority worked as VAD nurses overseas and in the UK- transporting the wounded, manning dressing stations, and cooking and nursing in both military and auxiliary hospitals to help to treat the sick and wounded soldiers. VAD nurses also worked in the UK to help civilians affected by the war, in air raid shelters, first aid posts, casualty stations and resting stations throughout the country.

When I first saw the collection of items in our archive, I was immediately drawn to this. I’ve seen a lot of collection boxes before, but this one really stood out to me. It was also the first time I learnt about the history of the Red Cross, VADs and more than I’d ever learnt at school during my history lessons. My mum is a nurse and has dedicated many years of service to the NHS, so in a way I think it’s one of the reasons it stood out to me. I could picture myself as a young girl, looking up at my mum before she would leave for work, so when I look at this I only see happy memories.