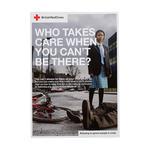 Poster: 'Who takes care when you can't be there?'

Description
“Who takes care when you can’t be there?”, First Aid Poster, made by the British Red Cross, 2013.

The purpose of the British Red Cross has greatly diversified since its formation in the late 1800s. Whilst it still supports people in war torn countries and provides disaster relief, there is a great focus upon the positive impact of first aid in the UK.

“Who takes care when you can’t be there?” This poster targets our everyday understanding of first aid, and particularly the first aid knowledge of children. It shows a schoolgirl standing over another child who has fallen off their bike, which highlights the fact that if an adult is not there to help, who can? This is why the British Red Cross believes it is so important for first aid training to be taught to children. This poster was created to gain support for their cause to incorporate first aid into the national curriculum.

Recent studies by the British Red Cross and the University of Manchester have found that 59% of deaths from injury could have been prevented if first aid was given. They also recorded that first aid was only employed in half of cases, even though someone else was there before paramedics 96% of the time. This is why the British Red Cross’ campaign #DontStopAt999 is so important. The two simple acts of placing someone in a recovery position or applying pressure to bleeds dramatically increases that person’s survival rate. Yet, only 1 in 20 people know what to do in an emergency.

I took a First Aid course when I was 21 and now feel confident in handling a first aid emergency. However, this made me realise how unprepared I was up until I took this course. I would have been one of the 85% of people who didn’t feel confident or had enough knowledge to help someone unconscious and not breathing. A case in which first aid is critical to a person’s survival. Everyone should have the opportunity to learn these vital skills, which is why I chose this poster. The British Red Cross’ fight to have first aid taught through the national curriculum is an admirable cause.

There is good news though! As of September 2018, the government announced that it will be adding first aid training to the school curriculum through health education. This will give children the understanding to recognise personal health issues and will build a new generation of lifesavers.

History
Poster produced for the second burst of a national advertising campaign to raise awareness of UK work in February 2013. 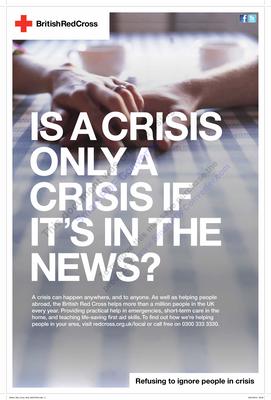