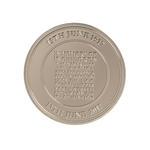 Silver medal commemorating the 100th anniversary of the bombing of Upper North Street School, Poplar in 1917

Description
Silver commemorative medal in a case for the 100th anniversary of the bombing of the Upper North Street School in Poplar.

Issued in 2017, marking the 100th anniversary of the Upper North Street School air raid of June 1917, this silver medal was created as a memento to commemorate the bombing of the school, in Poplar, London, during the First World War, which caused the unfortunate fatalities of eighteen children. The medal is smooth and rounded in shape, and has been placed within an acrylic plastic casing. Inscribed on the front is the date of the bombing - the 13th of June 1917 - followed by the words: ‘In memory of 18 children who were killed by a bomb dropped from a German aeroplane upon the L.L.C School’ and on the reverse are the names of the children listed, with an engraving of children's handprints.

The Poplar bombing was part of one of the most devastating air raids in the UK, taking place even before the Blitzkrieg operations of World War Two. The bombs were dropped, in daylight, on London in June 1917 by a fixed-wing aircraft, as planned by German forces in a strategic campaign against England in World War One, which mounted over 50 so-called "Zeppelin raids," from 1915 to 1918. A mass funeral was held at All Saints Church in Poplar, on the 20th June 1917, which was conducted by the Bishops of London and Stepney. The aftermath of the bombing also spurred a Recreation Ground Memorial, with gravestones and inscriptions dedicated to the memory of the Upper North Street School children who lost their lives.

On the 15th June 2017, Queen Elizabeth II and Germany's ambassadors to the UK visited All Saints Church to attend the100th anniversary commemorations in which German Ambassador, Dr Peter Ammon, stated: "The commemorations showed that friendship could grow out of hatred and tragedy."

Having worked closely with collections of a similar connotation, within the Manchester Together Archive, commemorating the Manchester Arena Bombing of May 2017, I was personally captivated by this particular object. Knowing what distressing effects such a horrific occurrence can have on a community, especially for those of whom are families and friends of the victims, it shows just how powerful the resonance of remembrance has throughout history, yet also stimulating an ever evolving growth of care and strength of a society. While this medal has an upsetting context, it also has a comforting value as it shows an example in history of just what a strong community is capable of, when faced with a devastating event. The medal therefore shows a populace banding together for love and remembrance - much like the aftermath of the Manchester Bombing in contemporary years - where people and politicians all over the world expressed their sincere condolences for the victims - as well as their love for the city.

History
The bombing of Upper North Street School in Poplar killed 18 children, on 13 June 1917.The bomb was dropped by a German aeroplane.